Voicevale has entered into a strategic partnership with Toyota Tsusho of Japan by selling 20% of its shareholding.

Toyota Tsusho Corporation, Japan, (a trading company within the Toyota group) handles more than 25,000 tonnes of nuts and dried fruits in Japan and worldwide with a turnover of $ 125 million in this division alone.

The new alliance will focus on expanding Voicevale Group’s product offerings, benefiting from Toyota Tsusho’s expertise in numerous food joint ventures they have around the globe.

Voicevale and Toyota Tsusho also plan to actively pursue opportunities to invest in upstream projects in origin countries to add value to their strategic alliance. 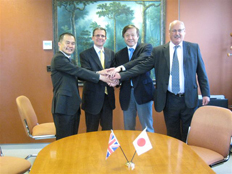